I had another fun run today, with RadioLab as my guide.
Earlier this month I mentioned that I had fallen across some stats about traffic fatalities. My hope in using that discovery is to make a (brief) case for public transit as a public health remedy.  The question is, how many of the (not quite) 40,000 people who die in the US each year could be saved if we had a vibrant public transit system.
Underlying that question (but unexpressed at the time) is the problem of why we can rally as a nation and go off to war after 3,000 people die in the attacks of Sept. 11, but can't muster the same resolve to attack problems that claim a much larger number of casualties.
We know the answer intuitively. The world stops for Baby Jessica. There seems to be something about how we're wired that leads us to follow more dramatic peril.
And that's where RadioLab comes in, with an episode unfortunately titled "Killing Babies, Saving the World." You should listen to it, but the intro paragraph explains the title. And the premise is that global concerns are a relatively recent phenomena in human evolution. We just aren't wired to care about the big picture.
The other episode I listened to is called "New Normal".  One of the interesting points (which was really a side point) was that Stalin wasn't a fan of evolution.  So, Stalin and the 44% of Americans who think we are today as God created us however many years ago are on the same side. I kinda like that. I wonder if Stalin got a flu shot. But as always, I digress. The main point of the New Normal is that we can change and sometimes for the better. But they use primates as one example (and foxes as another), so you'd have to believe in evolution to have hope.
You're supposed to taper before the big marathon. Sadly, I think I've tapered before the peak. Three days in SF last week without any foot time, half of my run this weekend. I'm off my feed. What surprised me Sunday when I ran was how much it felt like I was slogging through molasses. I've never started out so slow. A minute or two behind my normal pace. Actually, I think I'll do ok at the CIM. Not great, but ok. One thing I've learned is that one shouldn't let a single run summarize your state. But Sunday was discouraging. We'll try again Wednesday. And I'm going to try to do a long run on Sunday. Then it's two weeks until the next marathon. After which, I think the half-marathon is my sport.

Because of this little thing, I'm shopping for a new laptop. Coincident with pestering my few remaining friends at Apple for an employee discount* I looked at Craigslist. I think I found a good deal. I'll find out tomorrow. Just a few things:

1) I hate dealing with cash. $100 here or there is fine, but having laptop-territory cash around makes me nervous.
2) People are amazing. I've commented before about the person selling an Apple router for list price. Then a few weeks later it comes down a few bucks and a few weeks later a few more. The current price (and they've had them listed for months) is about $20 below list, but you have to buy two.
3) People are amazing part two. If this isn't a hot computer, I'm tempted to call the person and ask why they're selling a $2,800 computer for $600.
4)  People are amazing part three. This person got huffy (I think she was huffy-  it was via email, but she all capped "FIRM") when I asked if she'd come down a hundred bucks. But the day before the same computer was $1,100. So, it seemed like a fair question. $1,000 is not a great deal.
There. I've just pissed off someone selling a hot computer and suggested I had a lot of cash lying around…
* Apple has a program called "Friends and Family". It's there just begging you to harass anyone with an employee badge.
Update: Actually looking at the picture of the $600 Mac, I don't think they're selling what they think they're selling. To be charitable, they must have looked up the current edition of what they've got and just posted the specs.

The day started at the Amtrak station for the 7:00 to San Francisco. Since I had a 10 pack, all I needed was the $2.00 bus ticket to get from Emeryville to SF.

The first problem was the computer system couldn't sell me a $2 ticket unless it was also part of a train ticket purchase. Otherwise it's $8. Fine.The 2nd problem was the 7:00 train is cancelled for the next two weeks for track maintenance. Next train in 50 minutes.So, pass on Amtrak.  I need to get some work done.
Drove to North Concord; schlepped heavy Timbuk2 bag (over-loaded with my laptop, since I was going to have an hour and a half on the train to get some stuff done).
Got off at Embarcadero, started up the stairs and slipped, dropped over-loaded Timbuk2 bag and cracked the screen on the laptop. 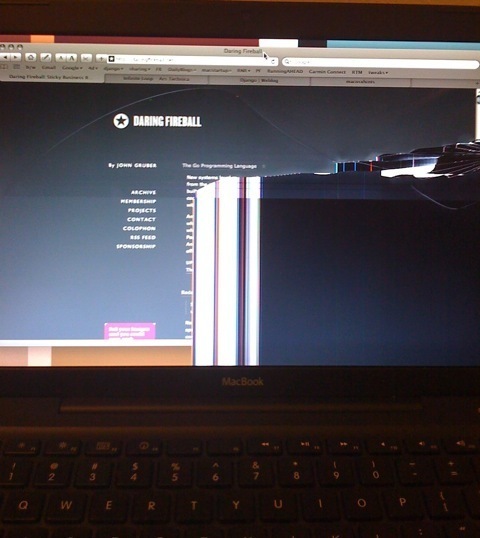 One of the nice fallouts from the marathon running is that Carrie (LFEW) wants us to run a half-marathon in February. She wasn't a runner, but is now, and has started her training. We ran together two weeks ago and setup a biweekly schedule to run together, alternating locations. She lives in San Rafael, I'm in Elk Grove, so one of us is driving to the other's place once a month. It was my turn to go to Marin today.

Invariably when we get together, the todo list is fairly long. Even after whacking a few things off the list, we had a busy day.
The first stop was the Marin Headlands, right next to the north side of the Golden Gate Bridge. Carrie's nephew, Andy, is battling Leukemia and friends and family have formed Team Andy! with each member buying a tee-shirt to 'represent'. (any time you have to put a word in quotes you should chose a different word.)  Carrie and I wanted to do an Amelie sort of thing with the Team Andy! shirt, so we visited the Golden Gate Bridge. It was a gorgeous day.
(on the back of the shirt are the lyrics to "You'll Never Walk Alone".)
While in the headlands, I played with the video feature of the new camera:
(I was polite in the next test...)
We left the Bridge and went around the block, as it were, to the Larkspur Ferry Landing. This gave us a shot of Team Andy! in front of a big Ferry with San Quentin in the back!
After the photo tour we went back to Carrie's and suited up for a four mile, hilly run. Mid-course, we found ourselves at Golden Hinde Blvd and I was glad I was carrying a camera on a run. :-)
After that, it got prosaic. Dinner, a quick run to Costco and some tech support and I was home by 9:00.
Thanks for the hospitality Tia Carmelita!
Thanks to T.Perry for the hat tip:
Friday lunch moved to Thursday. Hair cut. Consulting on cover page for friend.
Overwatered plant on counter resulting in flood, but much cleaner counter.
Talked to prospect who might want me after current gig is up.
Worked on current gig.
Worked on another client project that I'm fairly proud of but haven't been able to show off because it's behind a password. They're opening up a bit. I'll be able to brag on it soon.
And since you stuck with me this long - Princess Leia sunbathing. Twice.
Get Yer Geek On:
Via the always informative Gruber:
Web Inspector Updates
Get Yer Ya Yas On:
Via Merlin Mann:
The Stones, Honky Tonk Woman - Hyde Park, 1969  (yes, we're so sorry Brian died. Well, sort of sorry.)
Get Yer Butt In Gear:
Running in the slow lane: A story of a slower runner than me!
I got a horrible back spasm as I was getting ready to go out to run, so this is all the exercise I'll get tonight.
I'm using Amtrak to do my back and forth this week.  Thanks to a friend I found out about a discount that knocks about 7 bucks off a ticket, if you can pre-buy 10. Given the amount of time I have left on the contract, it seemed like a good deal.
It's crunch time on the project I've been working on most recently. The next two weeks will be full. Aside from the work, I'm supposed to get in about 100 mies of running over the next 15 days.

My friend Sherie (the vamp in picture 2) just sent me these pictures and I've asked i could post them. I gave her 12 minutes to respond and she hasn't, so I'll be asking her forgiveness if she says no.

Me on the left, Lynn Jensen, driver and dispatcher on the right. Sherie's note says '85, but the calendar to the left says 1984, right? 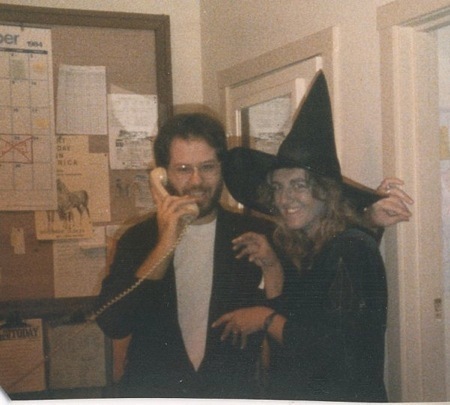