John Gruber, noted Mac pundit, extolls the virtues of his backup routine today. Happily, his practice is quite similar to mine. It's nice to get affirmed like that. His trouble shooting process is similar to what I would do also. I've been a DiskWarrior owner since the product shipped. 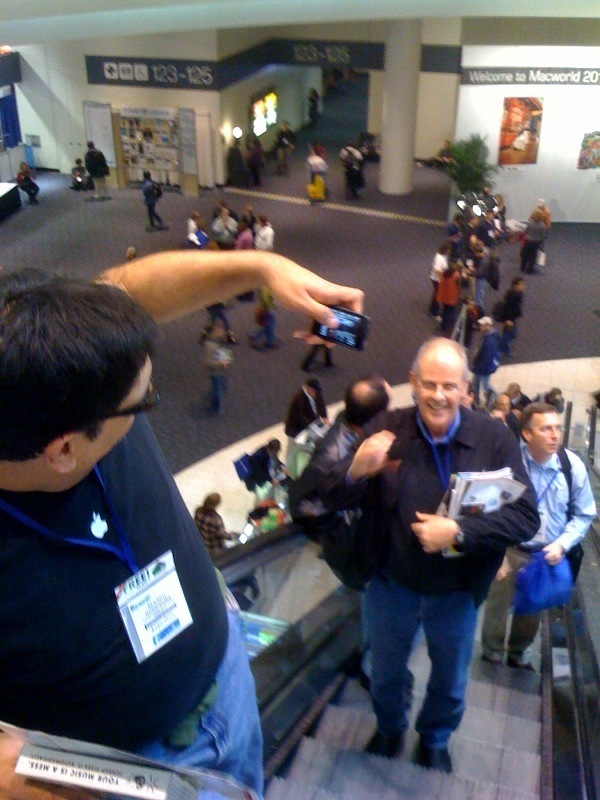 Last November I wrote up my current back up solution.  I pointed out that my attempt at using the cloud to backup, via a service called Mozy, hadn't worked.  My problems included a memory leak (the client ended up taking almost a gig of real ram) and the speed of initiating any user action - configuring backups or launching a backup for instance, was painful. Mozy also sucks a huge amount of computer processing, making the backup process more involved than it has to be.
I wanted a hands-free off-site backup solution and towards the end of last year, I signed up with CrashPlan. My experience has been great; it doesn't monopolize memory or cpu time. And, it's easy and quick to configure.
They're offering unlimited backup for personal use for $54 a year. You install their software, specify which files you want backed up and you're off to the races.
Most internet providers throttle upload speed (i.e. uploading files to the CrashPlan server can take a while, but it's your Cable/DSL provider's fault, not theirs.). So, for not a lot of money, CrashPlan will send you a hard drive and you can seed your backup and mail that back to them.   As it is, it'll have taken less than a month to get what I want backed up to them.
Unlike some of the cloud solutions, CrashPlan doesn't care what you send. Applications, movies, pictures, music, whatever is all fair game.
CrashPlan also offers some unique solutions. For instance you can designate a friends computer, which needs to be accessible via the internet, as a backup target. So, I could send a disk to a friend who would attach it to their computer and they'd host my backup, rather than CrashPlan.  Or you can designate another computer on your local network to receive your backup.
You can also backup using the CrashPlan software to a local drive, although, I'm not sure why I'd do that, since Time Machine is such a great local solution.
They sell a software update   - CrashPlan+,  which is only minimally more useful, especially for the cost, but the promotion I took advantage of threw it in for free, so I didn't have to decide.

1) AppleTV had to be resynchronized; could just pick up where I left off.
2) Time Machine couldn't pickup where it left off on the other computer.
3) Time Machine is taking forever…. I.e., Apple stuff is hard, everything else (The third party stuff.) has gone well.

A few weeks ago I broke the screen on my laptop. I immediately pinged some friends at Apple to see what the current friends and family discounts looked like.  I also started looking at the Craigslist ads.

Within a day or two I found someone selling a current generation MacBook Pro 15" for about $500 below list and about $650 below the out the door cost. Hmm. Not so cheap that I think it's hot, but a real good deal. And, cheaper than the smaller laptop I was thinking about getting from Apple.
I then spent a week and a half trying to connect with the fellow and today, finally, I was successful.
Now that I have the thing, I needed to copy all my data and settings from my old Mac to the new one.
Apple makes something called the Migration Assistant.  Very cool. All your documents, Applications (aside from the 'built-in' apps, which aren't touched.), settings, passwords,  etc. are just copied over from one Mac to the other.
Here's how the evening went.
1) Wipe drive on new Mac, install current OS. (10.6)
2) While the install is happening, go for a run. (No prompts in the middle of the install were waiting for me when I got back. They ask you everything up front…)
3) Start Migration Assistant. You're prompted to do this after a fresh OS install. I used one of my backup drives which was a clone of the Mac hard drive.
4) While that migration is happening, I go to dinner, pick Molly up at the train station, run to Fry's to get a FireWire 800 − 400 cable and come back.
5) Install software updates to get Mac to version 10.6.2
All done. My total time at the computer managing all this was 20 minutes. Total time to get it all done was about three hours.
So far all the primary programs I use are humming along without a problem. There are a few minor glitches - the Mac isn't seeing the AppleTV. And I forgot to deauthorize the old Mac with iTunes. But basically, I'm up and running.
Now, a few months ago I swore I wouldn't do this again. The downside to this migration is you're bringing over a lot of cruft from years past. But I don't have a week to mess around with this stuff, so I took the easy way out. 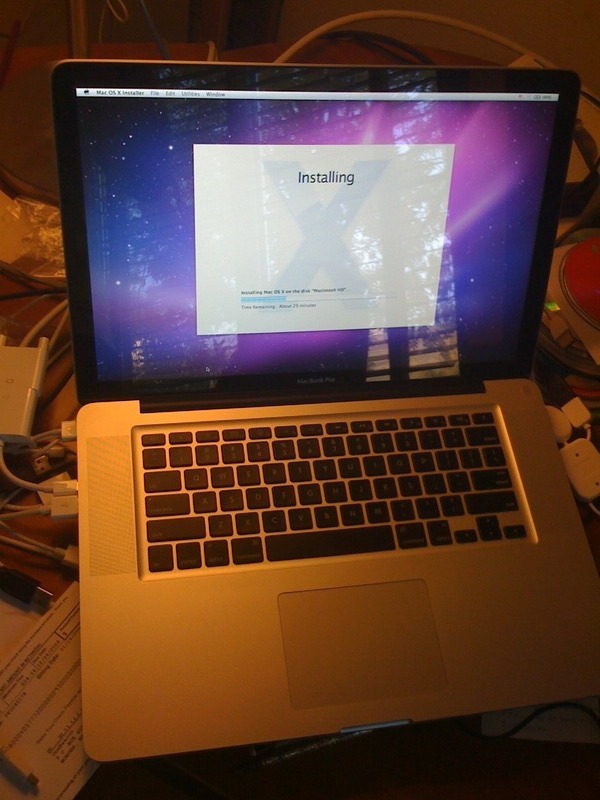 I'm offering up my backup routine to provide you some ideas and to get feedback on possible holes.

I want my backup to protect against:
What didn't work.
Mozy. Mozy is a service that backs up your data over the internet and stores it on their servers.  I used their free version (2 gig limit) for months and it was great. I tested a few restores and it worked just fine with that 'limited' data set.
Then I upgraded to their "home" package to get unlimited backup and it went to hell. There were two problems. The first, during the big initial backup, my computer and net access ground to a halt. All resources were taken over by Mozy. I worked around that by scheduling the backups at night, but there wasn't an easy way to automate that.  Mozy would essentially have to start over each night and figure out where it left off. It took weeks to do that. The time investment is to be expected, I don't blame Mozy for that, but it needs to run better in the background - it needs to be more invisible.
But the 2nd problem was it would get stuck on a file and just freeze. That is, if it couldn't move a file, for whatever reason, it didn't log that and move on, it stalled.
I haven't cancelled the account, because there is some data up there and I'm paid through the year. Mozy has updated their software a couple of times since I gave up on it; I may try again. (My last effort was with their version 1.6x. If you're reading this after that version, your experience may be better. Or worse.)
What is working.
Time Machine.  Built-in back up for the Mac. It backs up hourly and snapshots your data daily, and weekly for as long as you have room on your backup drive. When you run out of space it deletes the oldest backup to make room. There are only two configuration options. On/Off and you can exclude files from back up. It's fairly transparent.  In my home environment the hourly disk grinding can be distracting especially if I'm already having a hard time focusing. Being somewhat geek-like, I wish I had more control. If I did, I'd schedule daily, rather than hourly backups and I'd like to be able to manage some of my larger files manually. (i.e., this huge 10 gig data file (VMWare, ahem) need only be backed up monthly, not every time it changes. Overall, Time Machine handles the first and second case pretty well.
DropBox.  DropBox is another internet solution. Like Mozy, you're limited to 2 gig of storage for the free account. And it's not really designed to be a backup solution so much as a file sharing solution. Not in the 'rip off music' file sharing old days. But in the 'here's yet another way to share photos, etc. with your friends' way.  But what's really cool about DropBox is that you can use it to  synchronize data with multiple computers.
You designate a folder (or accept the default) to be your 'dropbox'. After that, anything in the folder is automatically copied to the DropBox servers. If you install their software and login from a different computer, then anything that you've put in the first computer's dropbox folder is copied to the 2nd computer. Anything you put in the 2nd computer's dropbox folder is synchronized with the first computer.  Very cool.
I use DropBox to back up my active client projects. Using a trick to synchronize data outside the drop box folder I'm able to maintain my preferred file organization.
Dropbox provides protection against hardware failure and theft or fire. If you're interested and sign up by clicking this link, I'll get some extra free space.
Mom. Mozy was supposed to be my complete off-site protection in case of theft or fire. When that didn't work out I switched to plan B. Mom. In this scenario, I purchased two small external hard drives and did a complete backup of my computer to a drive and take it to mom's. A month later, I back up to the 2nd drive, take it to mom's and bring the first one home. Wash, rinse and repeat. I use the Western Digital portable drives and Carbon Copy Cloner to do the backup. This is the theft and fire protection. Not the best because I'm up to a month out of date on things. But I've designated the most important things to be backed up by DropBox, so I'm not out of business if it does happen. Of course, if California falls into the ocean, like the mystics and statistics say it will, having a back up at Mom's won't help. But, at that point, I probably don't care.